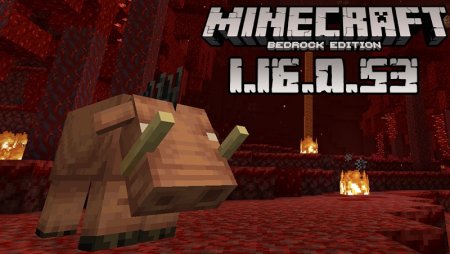 Minecraft PE 1.16.0.53 represents the latest game beta, which brings us nearer the final, full version. This version contains a list of changes, most of them related to the removal of several serious issues.

Let us remind you that 1.16.0.53 is a successor of Minecraft PE 1.16.0, the version that finally updated the Nether in a much better way than we expected.

If you are an active Minecraft PE fan, you must know about the rules and features related to beta versions, but if you don’t, we suggest you check any article on earlier game versions which are betas to understand what this implies.

And now, let us talk about the most important things: the version’s features.

Of course, this time the developers detected more crashes and removed them. Thanks to this, our game will crash more rarely, but in addition to the crashes, they also detected a number of issues that had to be fixed too. These are:

The MCPE developers are always doing their job responsibly and timely, and they did the same this time when working on the present beta.

We suggest you watch the trailer before downloading 1.16.0.53 for finding out even more details about it.

If you are glad about the release of this beta version, share this article with all your MCPE friends and leave feedback.

For a wider and more interesting Minecraft experience, we recommend you to explore our website where you will find a lot of cool maps, mods and other articles with download buttons. Have fun!