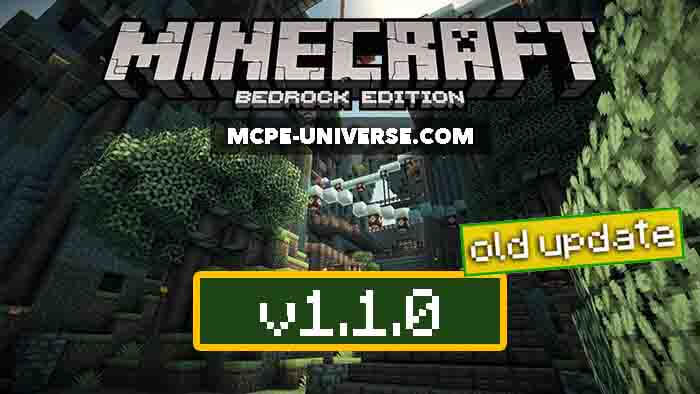 Minecraft 1.1 made a splash among all the Minecraft PE users in June 2017. This was due to the fact that by bringing a lot of new features related to exploration, made the first step in the grand Minecraft PE Discovery Update. Moreover, this version laid the first stone in the opportunity to interact with MCPE players using different devices.

This grand Minecraft PE version brought a number of new items to the game. These items are largely used in the present.

Earlier in the article, we wrote about spawn eggs for new mobs and now it is time to find out who they are:

In addition to the newly introduced items, blocks, and mobs, there are several new possibilities meant to make the gameplay much more interesting. These are:

These are the novelties developed by the MCPE developers for this version. Quite a lot, but this is not all. They also did a great job at modifying some already existing blocks, mobs, and other game features. We will tell you only about the main ones, but to discover all of them, all you have to do is download Minecraft PE 1.1.0 or any other later Minecraft PE versions.

We hope our article convinced you of the fact that Minecraft PE strokes the evolution of the game back in 2017. To see all the above-listed novelties and changes, download it by using the button below, share it with your friends and leave feedback.

After such an interesting trip to the past, we recommend you to refresh by installing and trying the recently released AR game: Minecraft Earth.

For more fresh MCPE related downloads, visit our website and have fun!